The Center for Consumer Law & Economic Justice opened its doors half a year ago. Like any 6-month-old, the Center has learned a few tricks, begun to get itself moving, and is looking forward to fully standing up in the near future.

A snapshot of what the Center has been up to since you last heard from us:

Over the summer, the California Supreme Court issued two decisions in which Berkeley Law students (with some assistance from their Consumer Protection Law instructor) had filed amicus briefs.

In the first case, De la Torre v. CashCall, the Court held that the interest rate on consumer loans of more than $2500 may contribute to a finding that the loans are unconscionable, even though in California there is no interest rate cap on loans of that size. Our brief in that case argued that interest rates, like unconscionability, must be considered in context, and offered extensive historical and scholarly support for that position. The Court agreed, and in its opinion made liberal use of arguments and sources that we suspected were drawn from our brief – a suspicion corroborated by painstaking research (see below) performed by the remarkable student who researched and drafted that brief, 3L Brady Williams.

The Court cited eight law review articles in its opinion. Our brief discussed all but one of them.

In the second decision, Connor v. First Student, the California Supreme Court held that California’s two principal laws regulating consumer reporting agencies could both be applied to the same set of facts without violating due process. In overturning a court of appeal decision that had held one of the laws void for vagueness because it overlapped with the other, the Court tacitly adopted an approach that we had urged throughout the course of the case – that “void for overlap” is not a legitimate constitutional rule. That position was skillfully developed by the drafter of our brief, Rachel Foodman, who garnered praise from the plaintiffs as well as fellow amici, and who is now with the Consumer Law Section of the California AG’s office.

On the first day of its existence in April, the Center filed an amicus brief in Manriquez v. DeVos, a case seeking to enjoin the U.S. Department of Education to honor its promise to forgive the debt of tens of thousands of students defrauded by Corinthian Colleges. The Center has since filed further briefs in the case, including one in the Ninth Circuit, where the case is now pending, defending the district court’s decision to grant in part a preliminary injunction requiring the Department of Education to process the loan discharges of former Corinthian students who have applied for one.

In addition, the Center filed a brief in the Ninth Circuit in Pacific Coast Horseshoeing School v. Grafilo, a case challenging on First Amendment grounds California’s rule requiring that for-profit schools and colleges establish that students who don’t have high school diplomas or GEDs can benefit from the program. The Center’s brief, authored by courageous and indefatigable 3L Cindy Pan, provided to the Court important background information on the startling array of deceptive practices engaged in by for-profit schools. It also examined the consequences of the First Amendment theory urged by the plaintiffs, noting that under that theory government would face significant obstacles in requiring any business engaged in speech (a school, a law firm, a movie theater) to employ even basic and universal consumer protection measures.

Bringing Together Consumer Policy Experts - To Wave a Wand

In mid-October, the Center brought together more than four dozen consumer advocates, academics, direct service providers, students, and policy wonks of all stripes from across the state and beyond to discuss consumer protection policy in California – and ways that it might improve. Conference participants were asked how, if they could wave a wand, they would change consumer protection law in the state. The resulting ideas ranged across a wide array of subject matter areas, encompassing potential changes both big and small. Participants universally noted their excitement at the breadth of expertise at the gathering and the amount they were able to learn about different policy areas and the issues facing different populations around the state. Convening different players in the consumer protection universe continues to be a focal part of the Center’s mission and activities.

And speaking of the Center’s Mission...

The statement is a work in progress. If you have thoughts for additions or changes, we’d love to hear them. tmermin@law.berkeley.edu

Nearly one hundred Berkeley Law students attended the Center’s orientation events in the months of August and September. Attendees showed up eager to learn more about ways to engage with consumer law here at Berkeley, though the Cheeseboard pizza was also certainly a draw. 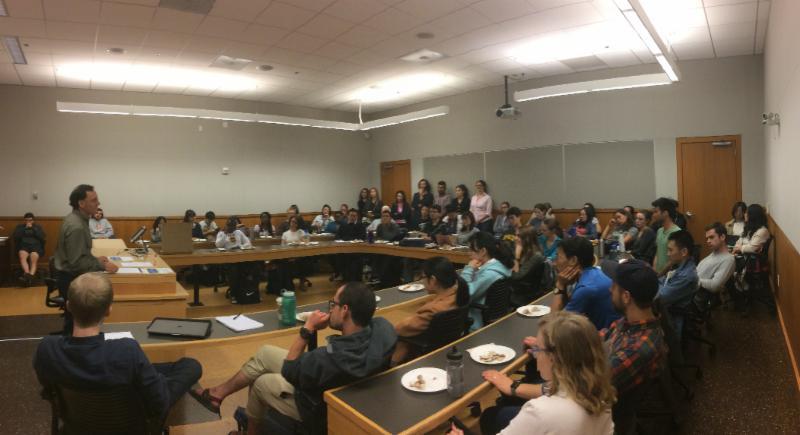 The Center was delighted to welcome noted appellate litigator and consumer advocate Deepak Gupta to Berkeley Law for a very well-attended student lunch talk in October. Deepak’s talk, which was co-sponsored with the Consumer Advocacy and Protection Society, the American Constitution Society, and the Civil Justice Research Initiative, touched upon his personal experiences in public interest law and how the recent changes to the Supreme Court will demand new strategies for doing economic justice work.

We are equally excited to welcome David Vladeck, former FTC consumer protection bureau chief and legendary litigator, for another lunch talk in November.

It's Never Too Soon for a Little History

Meanwhile, the Center’s Executive Director recently had the chance to reflect on the decade-long history of consumer protection law at Berkeley Law. The brief festschrift tribute to the Consumer Justice Clinic at the East Bay Community Law Center tells the story of how it all began....

All in all, not too shabby for a six-month-old! Don't forget to RSVP to our November 14 Launch Party!