Adults tend to report their age in years. But for the very young, developmental changes are so exciting that we count them in smaller increments. We are therefore delighted to report on the 15-month-old UC Berkeley Center for Consumer Law & Economic Justice as it enters toddlerhood. And like any self-respecting toddler, the Center has been getting into all kinds of things, spreading germs (the seeds of ideas), and spending time with friends….

One of the Center’s top priorities since its inception has been to raise the profile and expand the reach of Consumer Law. A key part of that effort is the Consumer Law Advocates, Students, and Scholars (CLASS) Project, a collaboration with the National Association of Consumer Advocates that focuses on building student consumer law groups and consumer law programs at law schools around the country. Berkeley Law’s own CAPS (Consumer Law Advocacy & Protection Society) is both a model for other schools and the engine driving the entire CLASS project. (See below for more on CAPS.) So far, three law schools – Utah, St. John’s and Minnesota – have announced they will be forming student consumer law groups this fall. We expect that number to grow in coming weeks. (If your law school might be interested in starting a CLASS/NACA chapter, let us know! If you don’t know if it has one yet, ask us!)

Journey to the Center…

The West Virginia University College of Law is host to one of the three new Consumer Law Centers founded in the past two years. (Another is at the University of Montana School of Law; the third … you know.) This spring, the Berkeley Center traveled to Morgantown, WV for the launching of the Center for Consumer Law and Education, a joint project of WVU and Marshall University. The visit included meals with the dean, faculty and students and a co-presentation by West Virginia Center director Jonathan Marshall and Berkeley Center director Ted Mermin. A transcontinental collaboration is under way…. 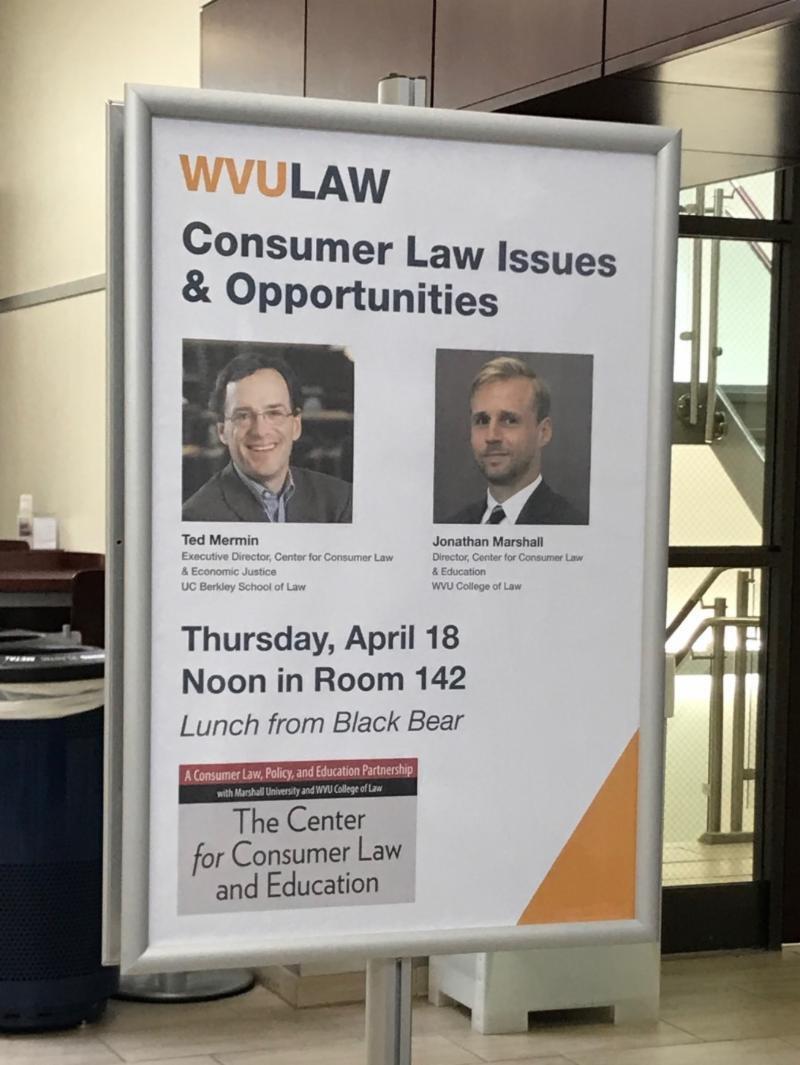 In May, the Center and the East Bay Community Law Center co-hosted – with the University of Minnesota Law School consumer clinic – the second biennial Law School Consumer Clinics Conference in Minneapolis. (The first was held at Berkeley Law in 2017.) U of M clinical professor and Center co-conspirator Prentiss Cox graciously served as emcee for the gathering, which included representatives from most of the approximately two dozen law school consumer clinics in the U.S.

When the Center launched in 2018, Dean Chemerinsky gave us a charge: “Make a splash. And offer more courses.” In its first 124 years Berkeley Law offered 3 consumer law courses (the first was in 2008). In the two-year 2018-20 curriculum cycle, Berkeley Law is offering 10. Yes, you read that right. The law school now offers at least ten distinct courses in Consumer Law, in addition to the Consumer Justice Clinic and its affiliated seminar. For the curious or incredulous, those courses include:

(And, as noted, that’s not including the Consumer Justice Clinic or the seminar that goes along with it!)

We suspect that this is the largest number of consumer law courses that has ever been offered at an American law school, but we would be happy to be proved wrong. Please let us know!

A repository of syllabi from these courses will soon be posted on the Center website so that schools seeking to offer more consumer law courses will have a place to gather ideas – and, we hope, to add their own syllabi to the collection.

Celebrating Students: Hats off to CAPS on its Tenth Birthday!

At the heart of the Center’s work is ensuring a robust future for Consumer Law. And at the heart of that effort are the remarkable students of Berkeley Law, particularly the merry band of stalwarts who call themselves the Consumer Advocacy & Protection Society, or CAPS.

Founded in 2009, CAPS has been the face and the force of Consumer Law at Berkeley for the past decade. What has this hardy band of committed students done? They have brought prominent speakers to campus, held workshops on credit reports and student debt, helped plan and host conferences at Berkeley Law, traveled to other consumer law conferences, created and successfully advocated for new courses, hosted mixers with alumni, and submitted briefs and regulatory comments. Then there are the projects you haven’t heard of (yet) because CAPS is still working on them: an alumni mentorship program, an official Consumer Law certificate, even a consumer law journal. In other words, the students of CAPS have pushed and deserve credit for some of the most important aspects of the consumer law program at Berkeley Law, and they are very much still at it. 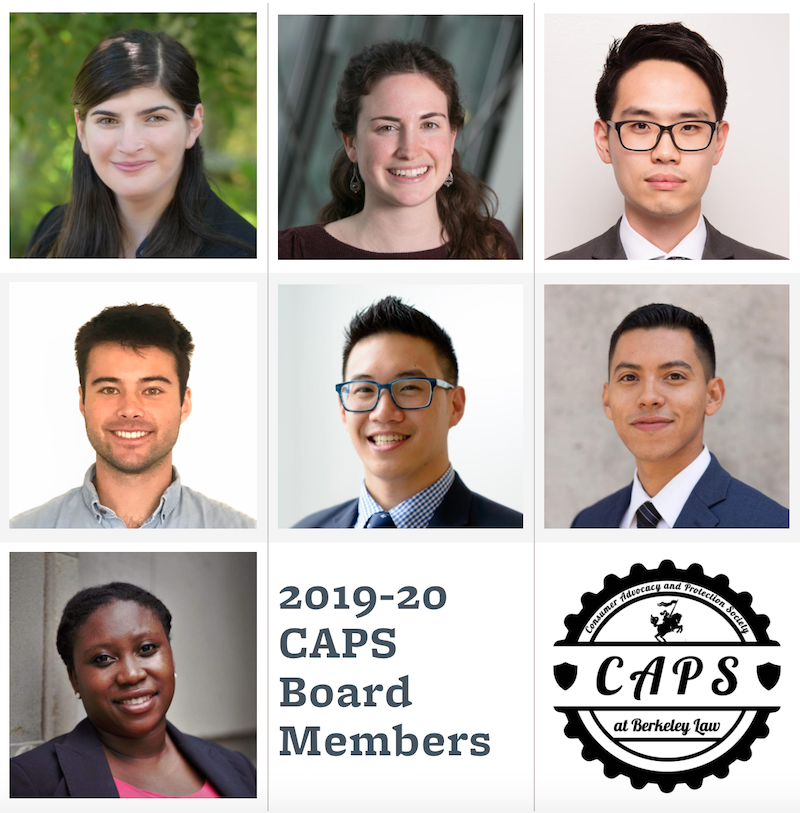 So what could the current CAPSules be up to that could possibly live up to that history? How about making a name for the organization not just in the law school but across the country? This past year CAPS began to make its institutional voice heard through not only amicus briefs but also in a slew of public comments in regulatory proceedings. These included comments to the CFPB regarding the consumer complaint process, to the FTC on expanding its regulatory authority, and to the FCC on the use of soundboard technology. And the 2019-20 slate promises to be even stronger.
Meanwhile, CAPS is playing an essential role in mentoring and advising students in law schools around the country who want to start law student consumer organizations at their own schools. And once those organizations are up and running, they can sign on to (and help draft) the trove of comments to regulatory agencies that CAPS is composing. A movement is afoot….

Coming Up: Save the Dates

Co-sponsored by the Center, the Federal Trade Commission, the California AG’s office, and the Better Business Bureau, this Common Ground Conference will feature a panoply of speakers and roundtables exploring the challenges faced by consumers in northern California and around the nation. It is free and open to the public. Further details and RSVP information will be available soon on the Center’s website.

Co-sponsored by the Center, the Lawyers’ Committee for Civil Rights, and Justice Catalyst, this conference will bring together local and national experts on corporate profiteering in the criminal system and the gouging of low-income families. Workshops will cover bail and immigration bonds, at-home detention devices, exorbitant telecom and commissary charges, and a wide variety of other abuses – as well as how consumer protection law can be deployed to help remedy the situation.